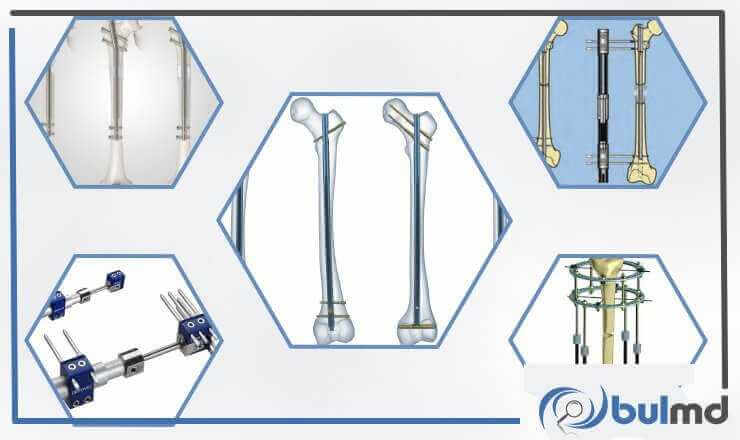 The decision of leg lengthening surgery is a question which must be thoroughly thought, as the surgical procedure requires a firm determination and patience from the side of the patient. Nevertheless, under proper guidance and care, and with the knowledge of what to do at each stage of the process, it is possible to have a healthy, less painful and successful height increase experience with successful results. Regardless of the method applied, the whole process can be broken into five stages; namely, inspection and examinations, the surgery itself, hospitalization, distraction period (daily lengthening) and lastly, bone consolidation.

Nevertheless, it is always crucial to get a full detailed briefing with all the relevant medical information from your doctor or medical professional before and after any such procedure. The mentioned duration varies from patient to patient, depending on the amount lengthened, patient’s age, body’s ability to regenerate new bone, etc.

At the moment, we apply four clinical methods that have seen wide acclaim and have been adopted throughout the world as reliable and effective methods for limb lengthening. They are as follows:

Ilizarov Method – Ilizarov’s surgical method was developed by a Soviet orthopedic surgeon, Gavriil Ilizarov and was first successfully applied in World War 2 and since has been in surgical practice, till today. It is a fully external method for bone lengthening, whereby the bone is fixated with thin wires and hoops; with an external fixator or so-called Ilizarov’s frames. Although Ilizarov’s surgical methodology seems quite direct and simple, the result may sometimes be quite frustrating, if not performed by competent hands, thereafter, and the surgical method is not applied as per the expectations of the patients. It is important to note that where, during the surgery or the post-op treatment, the medical team does not strictly comply with the principles laid down in Ilizarov’s methodology, and complications can arise, leading to gloomy outcomes for both, the patients and the medical teams involved. Regular care and maintenance of the device, its wires & screw; is crucial with this method, from the very beginning. As per the recommendations of medical practitioner’s guidance patients must strictly care and sterilize the devices, its wires, and screws, daily; usually with antiseptics such as 70% Pure Alcohol or a 10% Betadine solution, with sterile gauze. If the patient notices any indication of an infection, such as pus, redness, swelling and/or wound growth, around the device or its extensions, that they should immediately seek medical help from the surgical team who performed the surgery. The biggest problem with this method, apart from the strenuous daily regular care, is the chances of an infection, especially where sterilization is nor carried out regularly; since the wounds are open and fixated with wires; the chances of infections increase. The problem is that if an infection does happen, during the lengthening phase; the infection becomes a priority; thus the lengthening process is often halted till the time the infection subsides.

The “Holyfix” Methodology – This is a fully external method based on the Ilizarov technique; whereby rod-alike external metal fixators are attached to each of the legs of the patients employing pins affixed from the outside of the operated bones. During the lengthening stage, patients are required to turn screws on the device, simultaneously on both treated legs, to achieve their daily distraction of 1mm per day. Currently, this is the most economical methodology being practiced; with the only disadvantage that the patients are stuck with the devices for a period between 9 to 12 months; meaning that they have to walk, sleep and live their daily lives with the devices attached to their treated legs. The devices cannot be removed in the consolidation and strengthening stages, or until the bones fully return to their pre-surgery density and integrity and can fully bear the patient's weight. This may test the patience of many patients and may cause them stress at the same time. But being more compact and lighter than circular Ilizarov frames, they are easier to bear and hide under wide trousers or pants. Also, the lengthening act itself is easier to perform on these monolateral devices. These are some of the advantages of why many patients prefer Holyfix to classical Ilizarov frames when considering fully external methods.

“LON” Method (Lengthening Over Nails,  a combination of internal and external fixation) - is almost practiced in similarity with the “Holy-Fix” methodology regime; i.e. it also involves the use of the same external device, but the major difference is, there are internal stabilizers implanted as well; in the shape of thin metal rods which are implanted into the bone cavity during operation. This internal nail system, with the help of external fixators, significantly reduces the time spent with external fixators. And soon after the lengthening phase is completed (usually 2-4 weeks is enough to see some hint of consolidation on x-rays) the external fixators are removed. With the earlier removal of the external fixators, the patient’s comfort level dramatically increases. The weight of the patients during the consolidation phase is being carried by the internally embedded nails, till the time that the bones have fully consolidated; soon after, these internal nails are surgically removed, with the help of a minor surgical procedure, which lasts around 30 minutes at best. This combination system has allowed quicker recovery times, in comparison to “Holyfix”; and with a better quality of life for the patients, during the recovery phases, who opt for such a limb lengthening surgical procedure.

PRECICE 2.2 Intramedullary nail System by NuVasive(USA):  One of the major characteristics of the “PRECICE” method is that there is no need for an external fixator; because the intramedullary nail is motorized, thus allows for bone extensions with just a remote control; providing the patient more comfort and much shorter recovery times in total. Furthermore, the device is internally embedded into the patient’s bone, thus causes less discomfort and significantly limiting any risk of infections at a minimum. However, it is significantly more expensive than “Holyfix” & “LON” methods and there is a relatively fewer number of doctors who practice this method. With “PRECICE”, the surgeon makes a small incision and inserts the motorized intramedullary nail into the bone (either Femur or Tibia), and closes the wound; hence reducing the risk of any open wound infections. Soon after, the lengthening process is realized with the help of an electromagnetic remote control device; hence there is no device or fixator visible on the patient’s body. This method, alongside with Stryde, is currently the most comfortable amongst other methods of height lengthening available. However, in Precice 2.2, operated legs cannot bear weight and the lengthening mechanisms inside nails can be damaged, which will require replacement of nails. Thus it is required for patients to use a wheelchair during the initial 2-2.5 months, which is the lengthening period. After lengthening is over, the patient can once again bear weight on legs and return to normal life in a matter of several days.

“PRECICE STRYDE” is the latest and most advanced limb lengthening system available. Largely, the “PRECICE STRYDE” is a newer, version of the “PRECICE 2” version of the intramedullary nail system. It was developed upon the “PRECICE 2” system; and provides innovations and benefits, including enhanced comfort of the patients and extra weight bearing tolerance & capabilities even during the lengthening phase; thus proving as being the new benchmark for the future of limb lengthening procedures, throughout the world. It must be noted that both systems are, in theory, the same; i.e. intramedullary nails, thus are internally embedded into the patient’s bones; either Femur or Tibia; thereby significantly reducing any chances of infections as the wounds are closed; in comparison to older “LON”, “Holyfix” & “Ilizarov” methods; where external fixators are necessary for the extension of the bones. It must also be noted that both “PRECISE STRYDE” & “PRECISE 2” systems are much less painful, in comparison to the older fixator type methodologies, and generally, patients are much relaxed and comfortable during the extension phases in these systems.

The new “PRECICE STRYDE” system has essentially reduced the difficulties of its older counterpart “PRECICE 2” system:

Under normal circumstances, all limb lengthening systems generally tend to provide similar results in terms of height gains, but the difference lies in patient comfort and possible complications, during the recovery and consolidation periods. It is a matter of budget, risk levels, duration of fixation, the comfort level of each method that plays a major role in deciding this or that method.

It is important to conclude that “PRECICE 2.2” was a wonderful innovation; which enabled lengthening with a touch of a button on the remote control; rather than old school screws and wires; in case of external fixator mechanisms. However, as with all new things; newer technology takes over soon; and that is the case here; soon enough it is expected that “PRECICE STRYDE” will become the standard surgical technique for limb lengthening, in the future; and will replace the old “PRECICE 2.2” system and other past-era surgical methodologies.

For more information regarding Limb Lengthening surgeries and which method would best suit your situation best, please contact us at [email protected]